In the 90s, as CEO of one of the major food groups in the UK, Brian would spend quite a lot of time on his mobile phone whilst in his car.
He did a bit of research on cell phone radiation but was reassured by all the information published by Public Health England, “it’s not a problem. It can’t hurt you. It can’t damage you. If there are any issues, it’s purely temporary.”
So he carried on using his mobile phone.
Then one day, “that one day, whilst I was on the phone, it was almost as though my eardrum would burst because the pain was so intense.”
Initially, Brian kept quiet about his condition because he was concerned that his credibility would be affected and that his business would be affected.
But he began to think of the consequences of not speaking out, “in 15 to 20 years when a lot more people are becoming electrically sensitive and people are getting cancers and brain tumors and other conditions caused by it, I will feel guilty if I have not done anything to warn people.”
Want to know more? Catch Brian’s interview on Thursday, 8.29.2019 here
#StopDirtyElectricity #EMF #Electrosensitivity #DigitalAge 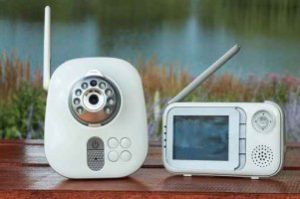 Modern Baby Monitors can be just as dangerous as Smart Phones or Cordless Phones.

Some Baby Monitors just transmit sounds and videos of the baby and others allow the parent to speak to the Baby.

Both can be very devastating. Some report that a wireless baby monitor less than 39 inches from a baby’s crib is roughly equivalent to the microwave radiation emitted from a cell tower less than 200 yards away.

When we have measured Baby Monitors, the worst Baby Monitor is over 120 times the safe level.

This Baby Monitor was a DECT model which is now a technology that is used in Cordless Phones. Most DECT units constantly produce radiation – even if the baby is not making any noise.

This parental unit is often worn by a parent because it has a belt clip or is kept on the night stand – right next to the parent’s head. These parental units also use the DECT technology which is very harmful.

The only way to be absolutely sure of the safety of your baby or grand baby is to measure with a Wireless / WiFi meter. 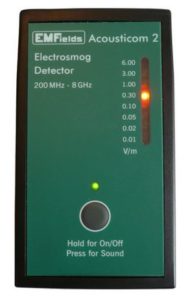 Note: Any electronic devices that have the capability of using Wireless / WiFi technology are normally not turned off if they are hardwired.

Only a Wireless / WiFi meter can determine this.