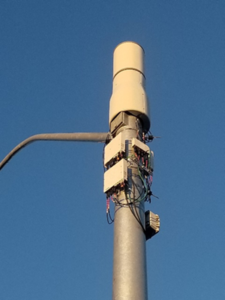 Yes, this is a combination of a 4G and a 5G antenna on a lamp post – no more than 50 feet away from a post-acute medical and rehabilitation center full of elderly people – Does this give you pause?

What’s the Matter with 5G, Smart Devices, and IoT? (Internet of Things)
Are there 5G dangers? 5G is one of the most insidious invasions of privacy ever promoted, and, until just recently, it was being implemented “under the radar.”

These millimeter waves are the fastest, shortest, highest-intensity wave lengths within the microwave spectrum and the highest radiation.

This is not just an upgrade of 4G. This is the next major evolution in wireless communication. 5G is the central platform for connecting everything to everyone at all times. It is the necessary technological support for IoT (The Internet of Things).

Here are some of the crucial elements to implementing 5G:

Once again, there are:

There are three defining elements:

There are over 21 billion smart devices in place right now – that is almost 3 times the population of the world and the global market for IoT technology is predicted to reach $6.2 trillion by 2025. What is different about 5G working together with IoT is that the devices will be able to collect and analyze data, communicate with other devices, and automatically perform intelligent actions.

It’s not just about having an array of wireless gadgets. It’s about connecting them all in a way that serves you better. And don’t we have that innate nature that wants to be served?

Here’s how it looks:

Sensors collect data about you and your family to determine what’s “normal,” for you. To serve you “better.” To make your life “easier.”
Your smart house knows your habits, how fast or slowly you move, how many people are normally in your house, what you are doing, when you eat, how many times you get up in the night, how many people normally come and go during a 24-hour period, so that if something out-of-the-ordinary happens, it can alert you. Or alert someone – hopefully not a burglar.
Instead of programming your coffee maker to start at a certain time, your smart bed lets your smart coffee maker know when you get up. Aaahh, the smell of coffee greets you.
Your smart refrigerator is on the blink. Before you even know it, before you can smell the coffee awaiting you, it has already scheduled a repair technician for a day and time it knows you are available. And diagnostics have been sent ahead and the part has been ordered.
Smart clothing on your toddler can alert you when he or she runs a fever at daycare or throws a tantrum. You can talk him or her down off that tantrum via your phone. Or, at least you can try.
And your fitness coach gets a detailed report of all your physical activity every day. So, there’s no fudging on your workouts.
Your smart car communicates with your smart house so that when you are near, it automatically turns on the heat (or air conditioning) and the lights. It can have your favorite music playing when you walk in the door. “Honey, I’m ho-ome.” (Miller, 2017)

Let’s review and reflect. The IoT knows your comings and your goings, when you come in, when you go out. How many people are in your home. How fast you all move and breathe. So, it could be extraordinarily useful for crime control and national security, busting drug houses and terrorist cells . . . and rooting out young girls (remember Anne Frank?) . . . and there would be no place to hide. Sigh.

Even if one were to choose not to employ “smart living” devices, the sensors are still with us. And most of your neighbors’ homes would presumably be “smart.” I am seeing the privacy issues getting out of hand, not to mention the inescapable Electromagnetic Radiation exposure stacking up like the Tower of Babel. How much is too much? This much!

While technological advancements can be convenient, and sometimes exhilarating, they also should give one a heightened level of concern about 5G dangers like:

The 2018 Winter Olympics in South Korea was the most high-tech Olympics so far. Major telecom companies showed off their capabilities, such as virtual-reality viewing stations and super-fast video streaming. “Viewers can control the time, target, even the angle of what they’re viewing,” said Michelle Toh, a correspondent for CNN. Using 5G, the wireless network technology that mobile carriers around the world have already adopted, Pyeongchang South Korea emerged as a testing ground for new technology.

And now we have the 2022 Winter Olympics in China, featuring an abundance of new and innovative technologies, all thanks to the 5G infrastructure. They include: robots, health tracking for your “personal safety,” smart beds to gather vital signs and data from athletes, or course, 5G 24/7, and digital currency only.

Yes, the race is on, in more ways than one.

Update: 5G build out is ahead of schedule. Telecommunications companies took advantage of the COVID lockdown in the USA to accelerate implementation. While we were locked down in our homes, the towers and antennas kept going up – without any control of placement from cities.

Why wasn’t 5G delayed? Some have tried. All the way back in September 2017, more than 180 scientists and doctors from 36 countries appealed to the EU for a 5G moratorium, warning of the potential serious cancer and health effects of 5G. They asked for a full investigation of the potential cancer and health effects of 5G, independent from industry, asserting that: “5G will substantially increase exposure to radio frequency electromagnetic fields (RF-EMF) on top of the 3G, 4G, WiFi, etc. for telecommunications already in place. RF-EMF has been proven to be harmful for humans and the environment.” (See Appendix IV in my book, Exposed: The Electronic Sickening of America for the complete statement.)

Furthermore, a statement from the International EMF Alliance urgently called for “a complete overhaul of EMF exposure guidelines based on up-to-date credible information from empirically based life sciences.”

However, Joel Moskowitz noted the October 2017 response to the 5G Appeal, “the European Commission claims that current limits on RF-EMF exposure established by the International Commission on Non-Ionizing Radiation Protection are adequate to protect the population, and that these limits apply to the frequencies to be deployed for 5G.”
Thus, the appeal fell on deaf ears and the 5G rollout in Europe continues.

A groundswell of grassroots efforts contributed to the delay of the implementation of 5G in California in the fall of 2017 – it was short lived. A Band-Aid on arterial bleeding, as it turns out. (Moskowitz, August 2017; Szal, 2017)

Yes, people have tried in the past, and there are a few isolated “wins” at the grassroots level. One recent report came from PITTSFIELD, Mass. — The Board of Health unanimously agreed to send Verizon a cease-and-desist order to remove its cell tower at 877 South St. However, board members acknowledged that this action is a long shot and would be expensive to the city if it has to go to court. (iBerkshires Staff / Wednesday, February 2, 2022)

It would have been nice if a grassroots effort of health advocates would have brought about a delay long enough to make a difference in the way and speed with which technology advances.

Wouldn’t it have been awesome for U.S. inventors and innovators to engage in a different “race”? A race for safer technology, effective personal shielding, or cloaking mechanisms for homes, or even a pathway to 5G “opt out”?

Such a delay would have been an opportunity for innovation and a dream win for the U.S.

You see, I am neither anti-technology nor anti-profit. But just not at the expense of my health and privacy.

The CTIA – the cell phone public relations firm – has on its website the following statement: It’s important the United States do everything we can to maintain our wireless leadership. Because when we win the race to 5G, we all win.

My bottom-line advice is to focus on protecting yourself and your home. There are many things you can do right now that are effective and inexpensive. Contact Bill@StopDirtyElectricity.com.