Cell Towers On The Ocean Floor- An Ecological Disaster 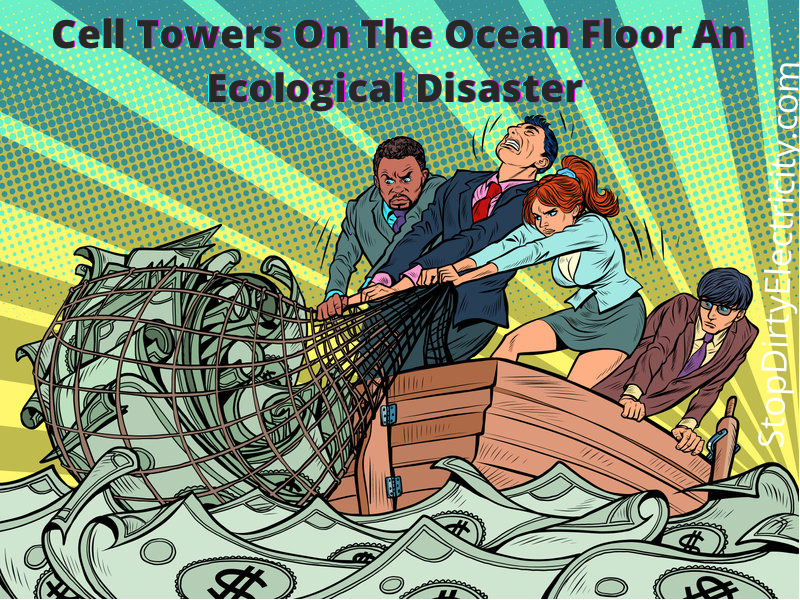 One blue sky above us,
One ocean lapping all our shores,
One earth so green and round,
Who could ask for more?- Pete Seeger

In 2018, on land and in space, preparations to deploy millions of antennas were very publicly being made and advertised, for “5G,” “Smart Cities,” and the “Internet of Things.” At the same time, and without any publicity, governments, research laboratories, and commercial and military interests were collaborating on plans to create “Smart Oceans” and the “Internet of Underwater Things” (IoUT). They did not consult the fishes, whales, dolphins, octopuses, and other inhabitants of those depths.

In the United States, the National Science Foundation funded what it called the SEANet Project. The goal was to enable broadband wireless communication from any point on or in the oceans to anywhere else on the planet or in space. The Internet of Underwater Things is being designed to enable all the same communicationcapabilities that are being provided on land, including “real-time video streamingfrom underwater.”

In the last three years, a flood of papers have been published by scientists and engineers in the U.S., China, Pakistan, Qatar, South Korea, Spain, Australia, Greece,

Some of the activities that supposedly “need” this technology in the oceans are:

Communication being more difficult to accomplish underwater than through the air, and more subject to interference, several different types of communication media are being used in the oceans to send data at different speeds and over different distances. Acoustic waves, radio waves, lasers, LED light, and magnetic induction are all being used to flood the oceans with data. An underwater GPS system is being developed. Most of these media work only for short- to medium-range communication. Long-range communication relies on acoustic waves, and is similar to the technology used in ocean sonar.

These technologies are already being marketed commercially and installed in theworld’s oceans today. At the 2022 Oceanology International conference, which willbe held in London from March 15 to 17, dozens of these companies will be exhibiting their products.

WaterLinked sells underwater sensor technology through distributors around theworld for use in aquaculture, and in underwater navigation. “Our Wireless SenseTMtechnology enables reliable wireless communication and innovative subsea sensorsolutions,” says their website.

SonarDyne International sells underwater acoustic modems to the oil and gas industry and to governments and navies.

Mediterraneo Señales Maritimas sells “data buoys that integrate sensors throughour datalogger so the data can be transmitted to a remote station and displayed onour software.”

“Underwater robots swarm the ocean,” says a page on the website of the Woods Hole Oceanographic Institute. The Institute has developed an acoustic-based navigation system that is enabling large numbers of underwater robots to work together. “Instead of using just a single, larger and more expensive underwater robot to cover an area of the ocean, we want to have hundreds or even thousands of smaller, lower-cost robots that can all work in sync,” says their webpage.

Ocean protection organizations have long been campaigning against noise pollution in the oceans, but they are only beginning to be aware of this new type of assault, which has the potential to dwarf all previous noise assaults in its scope and magnitude. For example, one of the campaigns of the environmental organization,Sea Shepherd, is “Silencing the Deafening Roar of Ocean Noise Pollution.” They write:

“In 1953, Jacques Cousteau published a classic memoir on his early days of underwater exploration. He titled this book The Silent World. Today, human activities make a mockery of that title. Over the past several decades, marine noise pollution has grown at an exponential rate. Noise from vessel traffic is doubling every decade. Pile-driving, dredging, sonar, and seismic exploration for oil and gas add to the cacophony. For marine wildlife, and especially for acoustically-sensitive cetaceans, this anthropogenic racket poses a grave and growing threat. Ocean noise pollution causes severe stress, behavioral changes, masking (i.e., difficulty perceiving important natural sounds), strandings, and noise-induced loss of hearing sensitivity.”

To this mix is now being added the Internet of Underwater Things, which is beginning to flood the oceans with sound in order to connect them to the Internet. And this sound will be pulse-modulated with the same harmful frequencies as radio waves in order to carry the same data. And to communicate over large distances, some of the underwater acoustic modems that are being marketed are capable of producing sound as loud as 202 decibels. That is equivalent to 139 decibels in air. It is as loud as a jet engine at a distance of 100 feet, and is above the threshold for pain in humans. These modems blast modulated sound at frequencies ranging from 7 kHz to 170 kHz, encompassing almost the entire hearing range of dolphins, which use sound for hunting and navigating.

If the new assault continues, it will provide the last nails in the coffins of our oceans, and — since the oceans are the source of all life — of our planet. Already in 1970, just 17 years after he published The Silent World, Jacques Cousteau, returning from 31⁄2years of exploration in which he traveled 155,000 miles, told the world: “The oceans are dying. The pollution is general.”

“People don’t realize that all pollution goes to the seas,” said Cousteau. “The earth isless polluted. It is washed by the rain which carries everything into the oceans wherelife has diminished by 40 per cent in 20 years. Fish disappear. Flora too.” And what was not being poisoned was being mined for food as though ocean life was an inexhaustible resource. “The oceans are being scraped,” he said. “Eggs and larvae are disappearing. In the past, the sea renewed itself. It was a complete cycle. But this balance was upset with the appearance of industrial civilization. Shrimps are being chased from their holes by electric shocks. Lobsters are being sought in impossible places. Coral itself is disappearing. Even in the Indian Ocean, which is little traveled.”

Life in the oceans today is hanging by a thread. If the rate of population declines continues, there will be no almost fish left in the oceans by 2048.1 The oceans are absorbing 24 million tons of carbon dioxide every day, are 26% more acidic than before we began burning fossil fuels,2 and have absorbed 93% of the heat generated by greenhouse gases since the 1970s.3 The damage already done to coral reefs by acidification, rising temperatures, and bottom trawling would take 100,000 years for nature to repair.4 Diatoms — a type of algae at the base of the ocean’s food chainthat is also the source of a third of the world’s oxygen production — have been declining by more than 1% per year for two decades.5 Populations of krill — the small shrimplike crustaceans that make up a large portion of the diet of many species of whales, penguins and seals — have declined by 80% since the 1970s.6 And the deepest layers of the oceans are severely depleted of oxygen — so much so that deep-diving fish no longer dive deep but remain near the surface in order to breathe. And populations of fishes that live in the deep sea are drastically declining. Warming oceans can no longer hold as much oxygen, and it is the deepest waters that are depleted of oxygen first.7,8,9,10 Large numbers of bottom-dwelling crabs have suffocated off the coast of Oregon.11 More than a thousand manatees died of starvation in 2021 off the coast of Florida because the seagrass they eat has been killed by pollution.12 And there is so much plastic throughout the oceans13 that sardines sold in an Australian fish market contain 3 milligrams of plastic in every gram of their tissue.14